The Suit: One Lawyer’s Tale of How He Won His Case but Lost His Suit 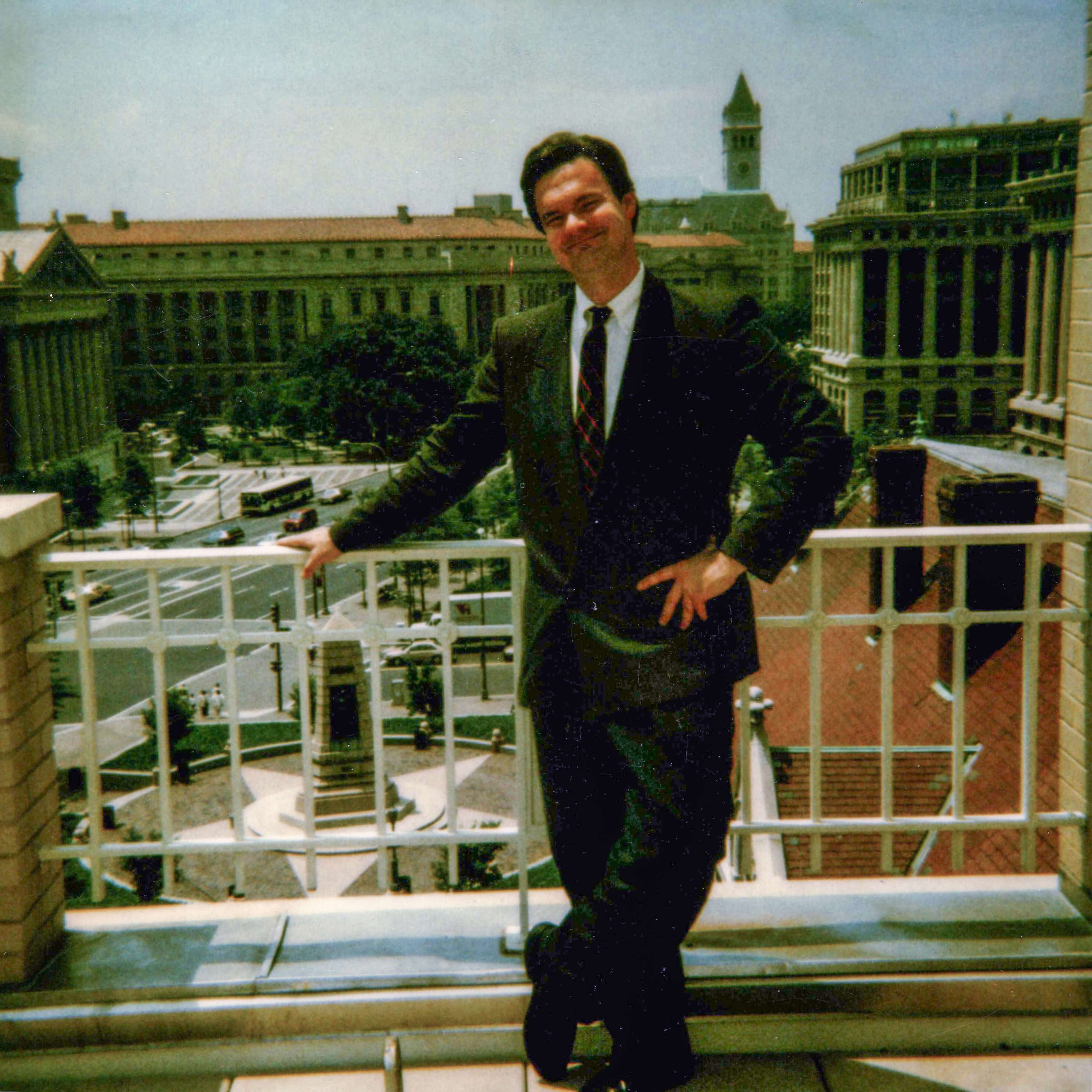 Saturday pickups are best for lawyers like me who don’t want to wait the average of four weeks between cases and don’t mind working weekends. You get on the Saturday list by filing your name and bar number on Thursday in a shoe box left in the Lawyers’ Lounge. There is no guarantee of work, but if yours is one of the 35 names posted late Friday afternoon, you’re likely to get a case.

It was on a Saturday that I met Pete. Like the rest of the accused, he had entered the city’s legal system by being stripped, decked out in an orange jumpsuit and ankle chains, then driven by a rickety green van from the D.C. Jail to an underground cell in the D.C. Courthouse.

I had run a similar gauntlet: All hand-held belongings entering the courthouse are fed to a black conveyor belt with X-ray vision Next, keys, pocket change, suspender clips, earrings, and belt buckles must be removed and placed in a Tupperware bowl—God help the verteran with steel plates.

Having made it past the detector, I headed for C Level. The Westinghouse escalators are frozen in a metallic cascade on Saturdays, so I walked down the two flights to the subterranean courtroom where the accused are “brought up”. The corridor leading to the courtroom was already littered with sleeping, forlorn figures: the bodies of family and friends of the accused. Past them, on an unlit wall outside the courtroom, hung a bulletin board with three mimeographed legal sheets posted sideways. A group of notepad-holding lawyers crowded the board like beggars scrambling for scaps. In this case, the scraps were on the Saturday lockup list.

There were 50 or so cases posted on the list, ranging from urinating in the subway to murder. Some of these were”fugitive” warrants—cases in which a person convicted or accused of a crime in another jurisdiction has been apprehended in D.C. Those cases, typically assigned to neophyte attorneys, are the worst to get, since you’re being paid by the hour. These cases simply require a warm body to inform the client that he or she has the right hearing; then to stand before the court and, in about 90 seconds, inform the judge of the client’s decision. Most of the time, the client waives the hearing, and the lawyer’s job is over.

The more sophisticated cases are assigned to lawyers with more experience (if not more ability); moving up the scale of difficulty, they include drunk driving, solicitation, maijuana possession—then dealing, and on into the lofty ranks of cocaine distribution, armed robbery, and manslaughter. Looking at the list, I saw that I’d been assigned a drug case. A good sign, from my point of view; I had arrived in the upper echelons. God willing, I thought, I’d live to survive a hierarchy where professional achievement is reflected in the relative social damage allegedly done by the client!

My client, Pete, had been arrested with another guy at the bus station by an interdiction team that watches for young males who fit the profile of drug “mules”: young, traveling in a pair with little luggage, looking nervous, and holding tickets paid for in cash. Pete and his co-defendant fit the profile and had given police permission to search them—not knowing that they had the right to refuse and walk away. In our case, police said the search yielded 88 vials of crack cocaine from the co-defendants underwear and a semiautomatic weapon from Pete’s waistband.

That was bad. Worse still was what happened during the “presentment hearing,” in which the client is brought before the judge, his charges are read, and the next step is decided. During the hearing, the U.S.attorney chose to continue the case until Monday, and transfer it to U.S. District Court. The federal penalties are much stiffer, and there is no Youth Act available for two 19-year-olds.

As I left the hearing, I encountered Pete’s mother, who had ridden down on the late-night bus from Brooklyn. I tried to talk with her about the charge. Crying the tears of the ages, she wanted to make sure I got a pack of Newports for Pete.

The seven weeks prior to Pete’s trial passed quickly. Then our day came. We stood before an archetype of a federal judge: black robed, with a white head jutting like a New Hampshire mountain top. The robe outlined a body that had given its arm for the last European war. Before him stood an array of defendants—young black men with blank stares, pawns in war against civilization, now called to make a less noble sacrifice in this less noble war.

Pete stroked his chin as the indictment against him was read by the judge. Charged under the strict mandatory-sentencing guidelines initiated during Reagan’s tenure, Pete faced a minimum 17 years without parole in this, his first arrest, for: 1.) drug trafficking (with a k—like Kafka’s Amerika); 2.) possession of, with intent to distribute, 88 vials of crack cocaine base; and 3.) possession of a firearm for the purpose of drug trafficking. I thought of all the times I’d discussed these charges with my client and all the times he seemed preoccupied with whether I’d brought a pack of Newports.

I wanted to help Pete, but the U.S. attorney would not budge. Rather than dismissing some charges in exchange for Pete’s pleading guilty to lesser offenses, he stuck with the criminal charges at issue in the case. I didn’t like this. Neither, it seemed, did His Honor; to him it must have seemed pointless to clog up the legal system with a jury trial, when there was little chance my client would be acquitted. We had to go to trial.

My motion to suppress the evidence due to an illegal search was denied, and a panel of potential jurors was delivered to the courtroom. We conducted “voir dire,” questioning them to ascertain which might be appropriate jurors: 14 were selected, mostly black, mostly blue-collar. As they were sworn in, I felt a little peace descending. Our situation was gloomy, but my instinct was still to trust the fairness of the jury system.

I waived opening statements because, in a trial like this, the defense must keep its cards held 2 inches from the face.

Upon reviewing the indictment, I had a glimmer of hope. Both defendants were charged with trafficking cocaine. If I could raise doubt as to whether Pete knew the other kid has the cocaine, we could win on that. The real gift was the second charge. The U.S. attorney’s office charged Pete with carrying a pistol for use in drug trafficking. But it had neglected to charge him with the lesser, simpler offense of carrying a pistol without a license—or to inform the jury that even if it found him innocent of drug trafficking, it could convict him just for having the gun. If I could raise doubt as to whether Pete knew about the cocaine, the jury might acquit him of the drug charge, and could not convict him of the crime that the U.S. attorney failed to charge him with. And Pete would walk away a free man.

Pete sat beside me clutching his Bible. It’s interesting how many find Jesus in jail, then lose him on their way to the parking lot. Pete looked good: His family had failed to send any clothes for the trial, but, fortunately, there was “The Suit.” The Suit had been left behind a few weeks before by one of my earlier clients, Warren, who had faced a minimum of 15 years but had been acquitted. Warren, too, had found religion. Upon winning our defense, he was so elated that on his way out he forgot not only about Jesus, but also about his suit. It hung in my office closet and now was serving a useful purpose. The marshal even commented that Pete looked like a model from GQ.

As the three-day trial progressed I saw my defense solidify. In the motion to suppress evidence, the cops made a point of explaining how Pete and the co-defendant hadn’t been able to see the guns or handcuffs carried by the undercover police force. This was intended to prove that the search had been voluntary rather than coerced. I asked the officers to repeat this testimony on the stand. I put Pete on the stand to show off his suit—and to tell the jury that he had just met the co-defendant the day before the arrest, didn’t really know him, and had no idea about the cocaine. He had the gun because Brooklyn is rough and he needed it for self-protection.

In my trial methodology, which could be called “minimalist,” these were the two bits of testimony needed for acquittal. My theory is that you win by reducing your entire case to a five-word sentence. In this case, there were seven words: Why didn’t he shoot the cop? Granted, I told the jury, Pete made a horrible mistake—he entered D.C. with a firearm. But that’s not what they want to punish him for. They want to charge him without knowledge of what’s in the other guy’s jockey shorts, but haven’t produced a shred of evidence. They want to charge him with using the gun for drug trafficking, but haven’t proved he was trafficking anything. And what was the one opportunity for Pete to use that gun for drug trafficking? You heard from the officer that he walked up to Pete on the sidewalk without showing his gun or letting on that there were other police officers in the area. If Pete had that gun for the purpose of drug trafficking, this was his one change to prove it. Why didn’t he shoot the cop?

In his rebuttal, the prosecutor declared that “this isn’t L.A. Law. This is the real world.” In this allegedly real world, my client’s guilt was obvious. But he was wrong. L.A. Law is the real world. Every trial lawyer who doesn’t watch it isn’t doing his homework. And Pete was acquitted on both charges. His co-defendant wasn’t so lucky.

After the verdict I went in back of the courtroom to the lockup. Pete would be taken downstairs and then released. I’d come to wish him well and collect The Suit. To my surprise, Pete had not changed out of it and into the orange jumpsuit. Pete grinned his GQ grin. The bible was nowhere to be seen.

“No, Mr. Hyde, this is my brother’s suit. My family sent this from Brooklyn. I know this is my brother’s suit. I remember him wearing it. You got it mixed up, My. Hyde.” He was equally appreciative of the verdict. “I don’t mean to make light of you Mr. Hyde, but I knew I would win because it was God’s will. It don’t matter what you do when God wants something to happen.”

Five minutes after the trial, there I was, just another adversary. The marshal asked if I wanted The Suit stripped from Pete’s back. I declined and walked back over to the Superior Court to check on the filing of voir dire questions in another trial I had set to start the next day.